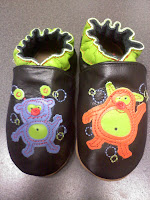 Well, it's been a week since our ECV. I knew Craig had done a blog post from the hospital while we were being monitored for two hours after the procedure, but hadn't checked until now - and I see that it was on our regular blog and not this one.  Oops!
So, the update:  The version was a success!  The process went just as it was described to us before hand, and the result was exactly what we'd hoped for.  We went in, they checked my weight and blood pressure, and strapped me up in a couple of monitors (one for the baby's heart rate, and one to detect contractions).  After a bit of monitoring, they hooked me up to an IV and gave me a small dose of the medication to relax my uterus.  It did raise my heart rate as expected, which was a strange sensation (I'm nervous!  Oh, wait, no, it's just my heart beating fast!).  Then the doctor came in, checked baby's position via ultrasound, put a bunch of goop on my tummy and turned the baby.  It took two tries, with a quick ultrasound check after the first one, and was VERY quick - maybe a minute or two?  And while it was a bit uncomfortable, it wasn't painful.  In fact, I told Craig that my main thought was "wait, I need to relax instead of being tense" - not "ouch!" 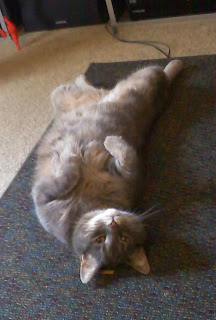 They double checked that the flip was successful with the ultrasound, put the monitors back on, and baby's heart rate was doing just what they wanted it to, so after a few minutes the doctor left (we heard a round of applause when he got out of the room and into the central Labor & Delivery area, which was kind of fun).
We were there for another couple hours of monitoring.  It was neat to hear baby's heartbeat the whole time, and hear how it sped up when I felt kicking and squirming, and then went back to normal.  The nurse came in a couple times because the monitor was picking up some weak contractions, but until she mentioned them (and showed us on the monitor) I hadn't even noticed them.
Then, after two hours, they brought in a release sheet, the nurse went over it with me, took out the iv, and we were off!  It was right at noon, so we went out to eat to celebrate, which was nice.
And that's the story of the successful doctor-assisted baby flip.  I've included a couple of random pictures to boost this post's cuteness quotient.
Posted by Kathy Glick Miller at 11:10 AM No comments:

Silly baby - you should flip!

I'm 35 weeks and 2 days today.  We just got back from a checkup, where the good news was that we got to take a quick peek at baby via ultrasound but the bad news was that it was to confirm that the glicklet is still breech (head up instead of head down).

We've known for several weeks now, so I've checked out spinningbabies.com, a website with ideas for helping to encourage breech babies to flip, and have been doing inversions, moxibustion, hip circles on an exercise ball, pelvic tilts, etc., which obviously haven't worked to date.  Since this is my first, I guess my uterus is doing a little bit too great a job of keeping the baby snug.

So, I'm going to keep doing what I can to encourage baby to flip, but am scheduled to see an OB next Wednesday instead of a midwife.  At this point I also have an external cephalic version scheduled for next Thursday at 9:00 a.m. if baby is still breech on Wednesday.  Unfortunately, that would have to happen at the hospital because of the need for increased monitoring (and I was hoping to avoid the hospital all together during this pregnancy!).

The points against the external version being successfull are that I'm a first time mother, so my uterus is not very stretchy.  Apparently they are more successful for later pregnancies. The positives are that I'm healthy and not carrying much extra weight, and that baby didn't look too big on the ultrasound today.

There is a chance that the external version could cause labor to start, and a very small chance of it detaching the placenta, either of which would result in a c-section.  If it is unsuccessful, they will want to schedule a c-section for 39 weeks, because there isn't anyone around with experience in delivering breech babies vaginally. However, if baby was to flip before the 39 weeks, there's a chance I could still deliver naturally.

If the external version is successful, hopefully baby will stay head down and I can have the birth I was hoping for at the birth center!

What I'd like to have happen, of course, is for baby to flip before next Thursday morning.  I'll keep doing what I can to encourage it.  At the same time, I'm also going to have to start preparing myself for the chance that I might have to have a scheduled c-section.

I've read that only about 4% of babies are breech at term, so I keep hoping that baby will go with the crowd and be part of the 96%, but each week it gets less likely.  I'm trying to stay positive, but I have to admit I'm a little scared about the way things are looking.

Anyway, my plans for the weekend include swimming, lots of cat/cow pelvic tilts, circles on birthing ball, inversions, moxibustion, and so on!  Our 13th wedding anniversary is next Monday, so hopefully baby will give us an anniversary present and flip sometime soon. =)
Posted by Kathy Glick Miller at 2:01 PM 2 comments: