Well, I'm 15 weeks now, and the little one is approximately the size of an apple or a navel orange, depending on who you talk to.  My morning sickness seems to be mostly gone, though I still seem to be needing more sleep and naps.  I've been pretty much crashing on the weekends, without the energy to do much.
My stomach seems to be staying settled much better than it did even a week ago, for which I'm grateful.  It's nice to not have to eat all the time, especially since I seem to be starting on some food aversions.  Certain things just don't sound or taste at all good.  For example, on Monday evening Kristi made a lovely meal of soft tacos.  I made one, took one bite, and realized I wouldn't be able to eat the ground beef (which I normally enjoy).  So Craig ate the rest of that one and I had one without meat.  It's not all beef - I had beef pad thai for lunch, and that was fine.  We'll see how this develops. 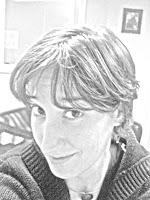 That's me, still not sure that it's sunk in that we're going to have a kid.

Since I've been eating more normally I don't seem to have gained any more weight in the last couple weeks, which is fine since I gained a little more than expected the first trimester, what with the constant eating .  During the second trimester the recommended extra calorie amount is about 300 calories a day, which isn't actually that much.
It looks like we're going to take a trip up to South Bend this weekend to go to the maternity store at the mall to try to find some pants.  I have a bunch of clothes I'm borrowing from a friend, which is awesome, but she's shorter than I am so the pants aren't quite as long as I like.  I haven't been able to find any pants that work in the local stores here.  I hate shopping for pants at the best of times, so it should be interesting.  I'm hoping to find one pair of jeans and one pair of black pants for work, and that should hold me with the other stuff I have.  Luckily, by the time I'm REALLY showing it will be much warmer and I'll be able to wear some stuff I have that is not winter-appropriate.
At the end of the month we're going to have a tour of the birth center where we hope to deliver if all goes well.  It should be quite interesting.  We'll also schedule our childbirth classes.  Of course, with our due date we fall right between the spring and late spring schedules, so we'll have to figure out which works best.  I guess I should be grateful to have a choice.  =)

Posted by Kathy Glick Miller at 3:00 PM No comments:

Here's the first post of 2010; nothing too exciting, just a general update.

We had our second appointment with the midwives last week.  Everything seems to be fine, though we did end up raising my Synthroid dosage again since my thyroid seems to be having a hard time keeping up with everything going on in my body.  I'm now on 150 micrograms, and we'll check again at my next appointment and see if that did it.  I've been tired, but I'm pregnant, so that wasn't really a surprise...

We did hear the baby's heartbeat again.  It was beating at much the same rate as the first time we heard it - between 150 and 160 bpm.  According to the interwebs, the baby is now approximately the size of a lemon.

My stomach seems to be less prone to feeling upset in general, though it still has its moments.  I do seem to fill up faster than the last couple of months, and it seems like fewer and fewer things sound appetizing.  Don't worry, though - I'm still getting plenty to eat. 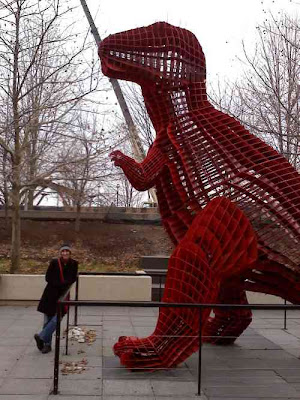 This week I started yoga classes again, which I really needed.  I'm generally bad at getting exercise in winter, and have remained consistent in that this year.  I'm taking two classes a week, and I really do feel better after class.  And it helps with strength, balance, and flexibility - all things I need to keep up with as the pregnancy progresses.  Plus, classes are in the same building that I work in, so it really couldn't be more convenient.  Also, Kristi is taking one of the same classes as I am!  Our schedules didn't match up for the other one.

Now that we're in the second trimester and have been telling people that we're having a baby, it's been quite interesting to see what people talk about and ask.  By far the most popular question has been, "Are you going to find out if it's a boy or a girl?"  The answer is, yes, we are.  But we probably won't tell anyone else what we find out.

The picture in the post is because I apparently hate posting anything without including at least one image.  That's me and t-rex in Millennium Park in Chicago.

Posted by Kathy Glick Miller at 1:43 PM No comments: